“Were you still the hero of your myth, Uncle Wink?” Asked Sam.
“Yes. But I was in a place beyond Greek myths and Western heroes like Orion. I had landed in the ancient nursery of Eastern philosophy, and their heroes were very different. I needed to find new context and meaning.”
“What do you mean?” Millie Asked. The smell of the roast boar was mouthwatering.
“I guess I should start from the beginning.” He said. “The whole story of individual heroism traditionally evolved from the collective spiritual belief that came out of each society’s view of the natural world. And there were only four possibilities: (1) They believed they were an integral part of a perfect Divine Nature, (2) They regarded themselves as interacting independently with it, (3) They considered themselves an integral part of a fallen or imperfect natural world, or (4) They thought they were a separate tribe, struggling in a hostile wilderness.
Morality depended on culture. Culture depended on climate. Climate depended on geography.
In the beginning was the Gaia myth, although even this was Greek. The world was an organism we belonged to. The wind that gave our grandfather his first breath also receives his last sigh. When a Sioux took the calumet pipe, he held the stem to the sky, so the Sun could take the first puff. There was humility in that.
The essential dilemma that came with living in the perfect world of natural harmony, however, was the tension created by the need for food, and its procurement. The hunter cultures came first. We owe them the form of our bodies, and the structure of our minds. Hunters were trained in individual skills that required very special abilities, resulting in individual heroic actions that would achieve a collective benefit. Their total focus was always directed outward, to the animal. Life was the business of living by killing and eating itself, casting off death and being reborn. The hunt was the ritual of physical participation in that uniquely individual act, and ritual is the enactment of myth. Every hunt was a different hunt than the last one, a place to overcome fear.
But the hunter didn’t only slaughter the animal, he killed a messenger of divine power, and generated guilt as a byproduct. A further ritual of atonement and restoration was required, propitiation in the form of a gift or a bribe, to the deity that was being invited to do something for him. Early hunting cultures imagined a kind of animal divinity, the animal master, who sent the flocks to be killed. Power and knowledge would come by going into the forest to fast and pray, and the animal would come to teach them. An accord would develop between the hunter and the hunted, in a mystical timeless cycle of death, burial and resurrection. Thus emerged the basic hunting myth, the regenerative life myth of a covenant between the animal world and the human world, and the alleviation of the guilt. From death came life; from sacrifice, Bliss. It was the first act of worship, and the seed of religion.
And the nature of life itself had to be realized in the acts of life, in rituals of birth and death. These required special places, rite sanctuaries where boys were initiated into the hunt, and went from being their mother’s sons to their father’s sons, like the cave of Altamira, where the bull was twenty feet long, and painted so that its haunches were represented by a swelling in the rock.
These required special people, like shamans, whose power came out of a, individual psychological experience, and not a social ordination. They weren’t priests. They were poets.
The restoration rituals were usually associated with the main hunting animal. To the American Plains Indians, it was the buffalo. On the northwest coast, the salmon. In South Africa, the eland. But the Indians in northwestern Mexico would sneak up on a peyote cactus, and shoot a little arrow at it. They were spiritual hunting.”
“Is that what you were doing, Uncle Wink.” Asked Millie.
“After a fashion, Mil. After a fashion.” 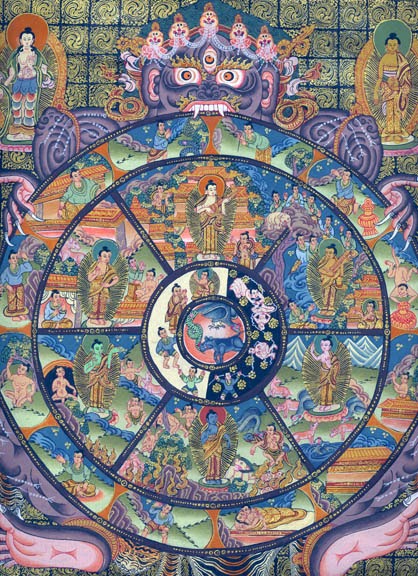 
I dreamt about it all night. Soman’s flute. It haunted me. Perhaps it was the ruby-robed monk’s vampire tattoo. It was the same ogre. I tried to convince myself that I had seen many other things more beautiful. It was an illusion.
I paid Soman as much as I could barely afford, and what he was willing to accept. Remarkably, it turned out to be the same number of rupees. As I carried my prize out of the shop, it struck me. At the end of the 5th century, the Bodhidharma brought Kung Fu to the Shaolin monastery in China. He had taught that, to go from mortal to Buddha, you had to put an end to karma, nurture your awareness, and accept what life would bring you. At the end of the 20th century, life was bringing me another bout of dysentery, my awareness was in overdrive, and my karma was kicking the shit out of my mortality. If there was any left. I figured out that venerable thin aesthetes, like bodhidharma, had such long beards, because they were just too worn out from their chronic diarrhea to shave.
The girls went on to Dreamland, and I crawled back up the ladder of the roof our guesthouse, to feed the flies. I looked at the embossed ogre on my temple flute, and began to see the connection. It was a curse for my worldly attachment.
I emerged from the rooftop longdrop later that afternoon, to find an invasion of puffy grey clouds, ballooning over the barren snowcapped mountain ramparts above me. Down below ran the white noise of white water, and the ratchet staccato of the crested kingfishers in the garden. There was a wind picking up, but it wasn’t mine.
Below me too, the whole of Ladakh was crumbling. Life had been slower and happier before the arrival of the money economy from the south. Conveys of TATA trucks came like the clouds, crushing communal bridges, and their connection to the earth and each other. Cheap commodities displaced the time and space and love required for their traditional production, and the scale of everyday life. The superficial teenage boy aggression of the West came to town, speeding up growth and killing its quality. After we left, the streams would become polluted, replaced by water trucks. Flour and mustard oil, initially cheaper by the truckload from the Deccan Plain, would become rationed, because the goods could only get through from June to October, and the village infrastructure had been destroyed to the point where there was none in farming. A place where no one was poor would become an ugly garbage-strewn encampment, where everyone was impoverished, on every level. The family would fall apart, and the young future hope, too slow for the invading culture, and having forgotten the skills of the one they left, would languish. A Shangri-La where there was little or no fighting would see toy guns in the shops and real ones in the streets. The wisdom that had once defined what was useful and harmful to the future would be overwhelmed by the seductive cleverness of instant gratification.
But not just yet. You still couldn’t see the charcoal and saltpeter but, every once in awhile, on the wind, you could smell the sulfur coming. Gunpowder was supposed to make all men tall, but my night continued up and down the ladder by candlelight, and I was getting shorter by the hour. Robyn and Julie were hanging off the rafters downstairs, practicing their gymnastics. It got me rethinking about the Vegemite theory of immune competence.
“Julee!” Said the lady of the house next morning, heading somewhere in her armadillo cobra-headed finery. Carol left with my temple flute a little while later, promising to mail it when she got back to Washington. I needed two Lomotil, just to get out of bed. Smiling Steve had heard I was sick, and marched his dzi stones over to the guesthouse, to commiserate.
We sat in the sun-splashed garden, and talked the day away. Robyn and Julie went through the labyrinth, into town, twice. The first time, they bought carrots and turnips for our Dal lake houseboat host, Jimmy. We were planning to leave Leh the next morning. They also brought hard-boiled eggs and bread and peanut brittle for me, although it would be another day before I would be able to eat any of it.
Their second foray was for bus tickets. From the mood they were in on their return, it was, as the bank manager had confirmed, not France.

Our Guesthouse in Ladakh 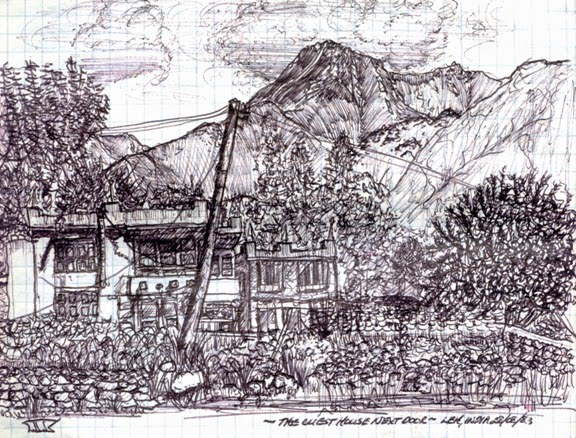 “It is better to travel well than to arrive.”
Buddha

“The speed of jet travel appears to have eliminated the distinctions
between geography and philosophy…which means that although
one can get anywhere, one is packing all the wrong things for
simple survival, let alone for having a lovely time.”
Gita Mehta, Karma Cola

“Now in Injias sunny clime,
Where I used to spend my time...”
Rudyard Kipling, Gunga Din

In the sun that rose on mountain pine forests, somewhere in the valley between the Great Himalayas and the Pir Panjal range, I began my romance with India, starting with the Kashmiri road signs.

‘Darling I like you, But not so fast... I am curvaceous, Take it slow...This isn’t a rally, Enjoy the valley...After whiskey, Driving risky...Don’t be silly, In the hilly... Peep peep, Don’t Sleep...Drive fast, And test your recovery... Be Mr. Late, not Late Mr.’

“Kashmir, the rest is worthless.”
Jahangir, asked his most cherished deathbed desire.